Role of the Referee

For the novice official, the Laws of the Game mirror the complexity of rugby and cover so many details that it is a challenge to remain focussed on the simplicity of the basic principles of the Game.

The questions arising are fundamental to the understanding of the game of rugby and remain equally important at a grass roots level through to highest levels of officiating:

Match Officials are an integral part of the game. The modern game asks match officials to be able to encapsulate the demands of athletic performance and the execution of fair and unbiased officiating.

Referees should present a positive image by taking opportunities to be friendly, good humoured, approachable and by being seen to be enjoying the role. If you referee matches in a common sense you will be seen to be an integral part of the game and empathetic to the needs of the players. You should acknowledge your mistakes and be prepared to explain why you may have made them. When players, coaches and spectators appreciate the role of the referee it is more likely that the right environment will be created, not only for making difficult decisions, but also for the development of the game.

The model below outlines the three areas that makes up the whole referee. 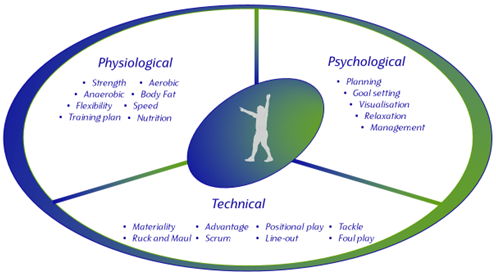