The principles of Rugby

The principles of the Game are the principles on which the Game is based. They enable participants to identify clearly what makes Rugby distinctive as a sport.

The team is in attack when it has possession of the ball.

The team is in defence when it doesn’t have the ball.

Contest possession in order to attack

The contest for possession is a key principle in Rugby. Various forms of this contest take place throughout all stages of the Game. This may be in dynamic play when a player from one team is in contact with the opposition,

or at static restarts - scrums, line-outs or kick restarts.

All of these contests must have a degree of fairness for both teams, so that each team has the chance to gain and/or retain possession.

At restarts, the initiative to commence the restart is given to the team that has not made an error. For example:

Attack by moving the ball forward

As the opposing team is trying to stop the attack and regain possession of the ball to launch their own attack, the attack may be forced to regroup at a ruck or maul in order to re-establish the space to move the ball forward.

The space is regained as the ruck and maul results in defensive players grouping to contest the ball and to stop the forward movement of the maul. This creates space across the field. Space down the field is provided by the laws of the Game creating off-side lines at the hindmost foot of the maul or ruck. This means that the defending team cannot advance beyond the hindmost foot of their team until the ball is out of the ruck or maul.

A team maintains continuity of play in attack by keeping the ball and advancing the ball towards their goal-line.

The initial task for the team not in possession is to deny the attacking team the space and time they need to advance the ball down the field. If the defending team achieves this, they may also be able to regain possession of the ball and launch an attack of their own. This action maintains continuity of play.

A game of many aspects and abilities

The cumulative effect of the first three principles is to create a multi-faceted Game in which all the players have the opportunity to perform a wide range of individual and team skills: running, passing, catching, kicking, tackling, rucking, mauling, lineout play, scrummaging and so on.

In this way, the Game offers players of very different abilities and physical characteristics the opportunity to participate in a team together. Individual players will have many skills in common while at the same time they are able to specialise in specific positional skills that best suit them.

Being able to gain territory, retain possession and eventually score points rewards a team that is able to penetrate through an opponent’s defence.

Even though they may not have the throw in, a team’s scrum may be able to push their opponents off the ball and regain possession. For this superior skill, regaining possession of the ball is the reward.

A team in possession that kicks the ball off the field of play because other options are less favourable will be penalised by conceding the throw in at the lineout. Their opponents will be advantaged through forcing this situation by being given the throw, and thereby the initiative, in throwing to their strength to win possession. The players of a team in defence who are ahead of the off-side line when their opponents have begun to play with the ball from scrum, lineout, ruck or maul and whose actions reduce their opponent’s options will be penalised by the referee. The penalty will be in the award to their opponents of a penalty kick.

When watching a game and/or a referee try not to ball watch but look for different elements maybe even one at a time. The diagram below may help. 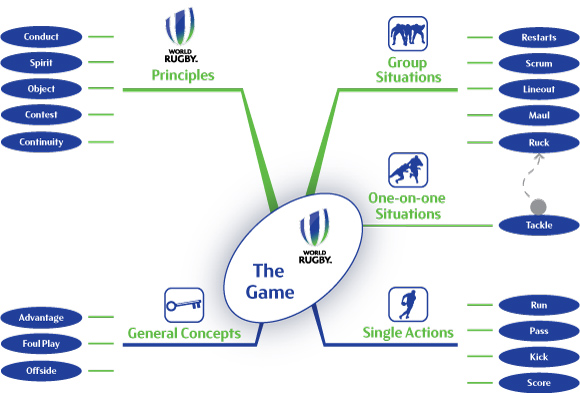 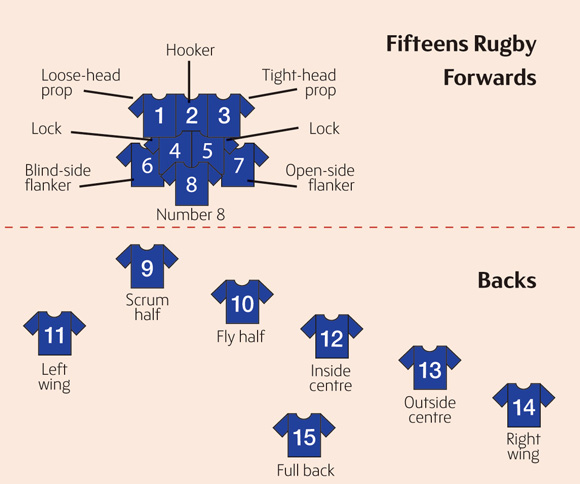 Their primary role is to anchor the scrummage and provide lifting strength and support for the lineout jumpers. Also pivotal in rucks and mauls.

Upper body strength to provide stability in the scrum, endurance, mobility and safe hands to maintain continuity of play.

The hooker has two unique roles on the pitch as the player who wins possession in the scrum and usually throws the ball in to the lineout.

Great strength to withstand the physicality of the front row coupled with speed to get around the pitch and good throwing technique.

Locks win ball from lineouts and restarts. They drive forward momentum in the scrum, rucks and mauls providing a platform for attack.

The key characteristic is height. The locks are the giants of the team and combine their physicality with great catching skills and mobility.

Their key objective is to win possession through turnovers, using physicality in the tackle and speed to the breakdown.

An insatiable desire for big tackles and a no-fear approach to winning the ball. A combination of speed, strength, endurance and handling.

The Number 8 must secure possession at the base of the scrum, carry the ball in open play, provide the link between the forwards and backs in attacking phases and defend aggressively.

Good handling skills are essential, as is a great awareness of space. Power and pace over short distances is crucial - gaining territory and field position for a quick release to the backs in attack.

Provides the link between forwards and backs at the scrum and lineouts. A true decision-maker, the 9 will judge whether to distribute quick ball to the backs or keep it close to the forwards.

A multi-faceted position, the scrum half must be powerful, have explosive speed, all-round handling and kicking skills. The great 9s are highly confident players, with excellent game understanding.

As the player who orchestrates the team’s performance, the 10 will receive the ball from the 9 and choose to kick, pass or make a break based upon split-second interpretation of the phase of play.

The ability to kick well out of hand, ideally on either foot, deft handling skills, pace, vision, creativity, communication skills, tactical awareness and the ability to perform under pressure.

The centres are key in both defence and attack. In defence, they will attempt to tackle attacking players whilst in attack they will use their speed, power and creative flair to breach defences.

The modern-day centre is lean, strong and extremely quick. The position demands great attacking prowess, coupled with intensity in contact to either retain or steal possession.

The wings are on the pitch to provide the injection of out-and-out pace needed to outrun an opponent and score a try. It is also important for wingers to be solid in defence.

Pace. Wings will often find themselves in open space, when their number one priority is to press the accelerator and run for the line. Strength and good handling are an advantage too.

Generally perceived as the last line of defence, the full back must be confident under a high ball, have a good boot to clear the lines and a enjoy the physicality required to make try-saving tackles.

Great handling skills, pace in attack and power in defence. An ability to join the line at pace to create an overlap and try-scoring opportunities for the winger. Tactical skill and flair.