World Rugby Passport - Why the whistle was blown (or not)

Why the whistle was blown (or not)

In very simplistic terms, it could be suggested that the match official education programme supplies individuals with a licence to referee Rugby. Knowledge of the Laws of the Game informs newly accredited referees when they should blow their whistle to stop a game. Therefore, referee education and knowledge of the Laws does not necessarily assist them in creating game continuity, but rather it identifies potential stoppages in play for them to be aware of throughout a game.

but there is only one Advantage Law.

What is more significant is that the 86 offences are well documented, very precise and worded in clear language. The one Advantage Law (Law 7) is, on a comparative basis, quite vague and specifically open to the referee’s discretion.

Referees learn about their role and when to blow the whistle. At the same time, the referee is introduced to the less specific Law 7 Advantage. It is only after individuals have then become active referees that intense referee development begins. Once referees have reached an appropriate level of fitness, knowledge and experience they then move on to other important issues, such as:

Application of the Laws of the Game is far more important than knowledge of the Laws.

This statement is especially applicable to issues surrounding the Advantage Law. It is essential for all referees to learn and recall all of the Laws. It is paramount for the referee to develop an understanding and application of the Advantage Law as merely knowing and recalling the wording of the Law is insufficient. It is equally important for players, coaches and spectators to appreciate the reasons for a referee blowing the whistle or not blowing the whistle.

If a referee applies the Laws in a wise and astute manner, he/she has the potential to lift a game to a higher tenor. Appropriate application draws upon two basic principles:

• A referee only blows the whistle for issues that have impact upon the game.

It should be the aim of a referee to let the teams play the game in a continuous manner. Unfortunately, there are times when the referee simply has to blow the whistle and cause play to stop. It should be the objective of all referees to keep the whistle blowing, and therefore the stoppages, to a minimum.

At all times, there are the three guiding principles: 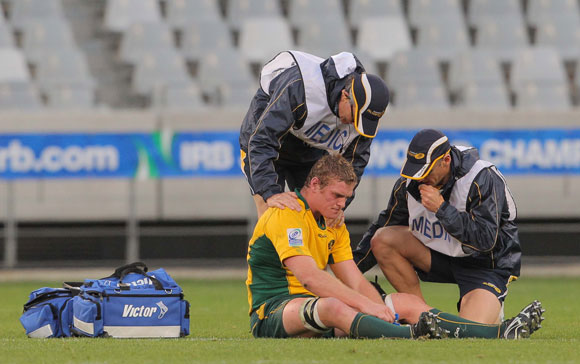 How should a referee minimise the use of the whistle?

Continually ask the question “Has there been an offence?”

This raises the question of when within a game does an issue arise but a referee should not blow the whistle? There are two different occasions:

• when the referee decides to apply Law 7 (Advantage Law)

• when the referee applies discretion to ask himself/herself the question, “although an offence occurred did the issue have any material impact upon the game or upon player safety, and therefore need to be penalised?” (Materiality)

The Law of Advantage takes precedence over most other Laws and its purpose is to make play more continuous with fewer stoppages for infringements. Players are encouraged to play to the whistle despite infringements by their opponents. When the result of an infringement by one team is that their opposing team may gain an advantage, the referee does not whistle immediately for the infringement.

In summary, a referee is in a position of game management and player management to blow the whistle to stop play quite frequently to stop play. However, given that a major principle of the game is for a team “to maintain continuity of possession” as stated in the Playing Charter there are many instances in a game where the referee has a right to blow the whistle but decides to allow play to proceed.

When any person watches a game of Rugby, they observe many incidents that are clear for all to see. At other times however, an incident that one observer views may be quite different to the way another person interprets what has just occurred on the field. This becomes evident in a public manner when television broadcasters commentating upon a game interpret incidents in a different way to each other even after it is replayed many times, from many different camera angles and at times witnessed by them both (and all of the viewers) in slow motion.

It also becomes quite evident when a referee calls upon a Television Match Official (TMO) when the referee’s decision simply cannot be based upon a clear and obvious interpretation of what he (or she) had just observed from their one, and only one, angle of view. There are even times when the TMO with multiple angle replays and slow motion replays cannot interpret a situation to make an absolutely certain “clear and obvious” decision.

All match observers should always be able to identify “clear and obvious” infringements. However, given the Advantage Law, this does not automatically require a whistle to be blown by the referee to stop play. This does not prevent the referee from dealing with an infringement “on the run” during play or at the next stoppage in play.

All of these processes are simply tools to assist in observing and managing infringements so that issues that are not necessarily immediately “clear and obvious” become more evident in the on field decision-making.