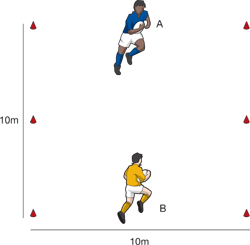 Player A can move laterally, forwards or backwards. Player B must mirror Player A’s movements. 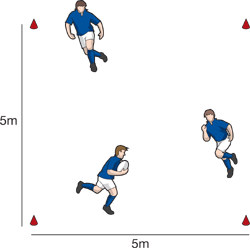 In threes or fours, the players pass to each other and after every pass must touch 1, 2 or 3 cones (coach’s choice) and then rejoin play. 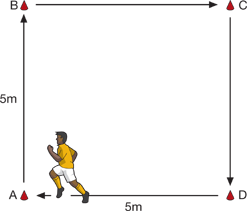 Move from:
A to B forwards
B to C laterally
C to D backwards
D to A laterally. 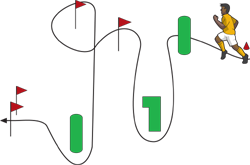 Arrange any kit in a slalom fashion. Design the course so that players will run forwards, backwards and laterally.

Team A attacks team B. When a player is touched, that player must play the ball between the legs and a team mate must pass it to restart the attack. The player who makes the touch must run around a cone or tackle bag before returning to the game.

There are two versions of this drill. In drill 1 the players run to the first cone where they must then make a pass, continue to the next and make a return pass. When they reach the last cone they sprint back to the start. The drill is timed and the players are encouraged to concentrate on a good pass. Distances between the cones are 10m.

In drill 2, after initial straight line acceleration the players go diagonally from the first to second cones and as the players cross, they make a switch pass. This is completed for the next two sections. After the players reach the last cone they sprint back to the start. The drill is timed and the players are encouraged to concentrate on a good pass. Distances between the cones are again 10m.

Team A attacks team B. The attacking team receives a kick from team B.
Part one is 5 attackers against 1 defender, with just one touch allowed. If team A score, they run back to their side and receive another kick from team B. This then progresses to:
Part two: 5 v 2 and two touches allowed
Part three: 5 v 3 and three touches allowed
And so on until it is 5 v 4 with four touches allowed. Possession changes to the other team if the attacking team is touched more than the allowed number of times.