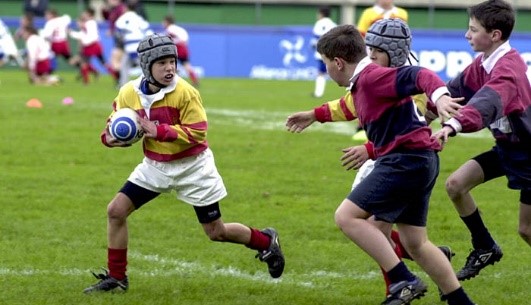 Agility is a very complex component of fitness. It is much more than just a quick change of direction or a side-step as it involves decision making, reaction to a stimulus, and straight line speed components. The complexity of agility and the number of components that can influence execution of this skill makes it a challenging thing to measure and train (Joyce and Lewindon, 2014). Research on agility in children is limited which is surprising given its importance to most sports including rugby. From the physical side of agility, children should naturally improve their agility through training fundamental movement skills, speed, and strength. These components of fitness will help the child improve their agility without targeting agility specifically. The child however should also be exposed to games and activities that include changes of direction in order to develop technique and to get used to the demands it places on the body.

The mental or cognitive side of agility cannot be overlooked and it needs to be trained and developed just like any other skill. Visual scanning, situation pattern recognition and anticipatory qualities all fall under this cognitive area of agility. In rugby, anticipating an opponent’s next move or being able to recognise what they will most likely do in a specific situation will greatly improve the player’s chances of being able to change direction to make or evade a tackle. This is a good example of why it is important to train the cognitive side of agility. Training for children may initially focus on more closed skills and planned changes of direction so as not to add complexity to drills and games too soon. As the child progresses through childhood, however, more reactive agility or unplanned changes of direction activities could be used to train the cognitive side and add complexity to the training. According to Joyce and Lewindon (2014), a proposed agility development plan for children would be; 60% fundamental movement skill training, 25% planned change of direction speed and 15% unplanned reactive agility training.

Where possible it is advised that coaches mirror the game situations of rugby to aid pattern recognition and sports-specific agility development. A player who learns to use their agility to defend or attack in rugby scenarios may gain better skill transfer to the game. Some examples of planned and unplanned agility drills are provided below.

Y drill point and cut - Y marked out in cones. Player sprints forwards to a cone where the coach is standing, the coach will point in a certain direction, the player reacts, changes direction and sprints to the end cone.

Attacker v defender – Channel marked out with cones. One player has the ball and tries to evade the defender without being tagged.