Assessing internal and external hip rotation helps indicate whether the player has:

Here we present a supine position for hip internal and external rotation assessment. According to Reiman & Manske in 2009, to administer the test, the player lies supine (face up) on the floor with one leg extended and the other flexed to 90 degrees at the knee.

When administering this test, it is important to establish a baseline position, which is parallel to the midline of the body as shown by the black line along the player’s thigh in Figure 1a and 1b. Then, with reference to this, the test administrator can estimate the degrees of rotation or preferably use a goniometer to attain a more accurate measurement. To examine internal range of motion, from the supine position, bring the player’s lower leg and foot outwards and as far away from their body as they comfortably can as shown in Figure 1a. From the supine position to examine external range of motion, bring the players lower leg and foot inwards across the body and other leg as shown in Figure 1b

Figure 1a. Example of limited ROM in internal hip rotation. Note that the normal internal rotation ROM is between 35-40 degrees. In the example above, the rotation is 28 degrees. 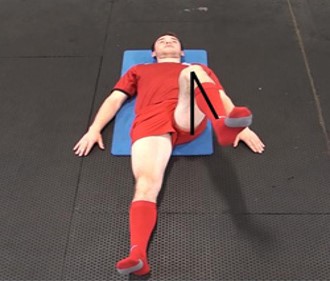 Figure 1b. Example of limited ROM in external hip rotation. Note that the normal external rotation is between 50-60 degrees. In the example above, the rotation is 45 degrees. 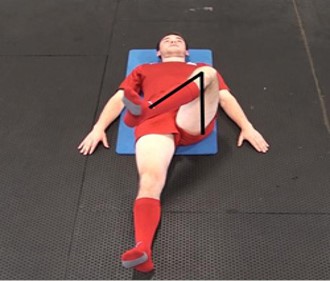 According to Sahrmann in  2002, a restriction in either internal or external rotation may be a performance inhibitor for many players and it could also be a predisposing factor for injury. Having normal hip rotation allows for unimpeded movement about the hip. During play and tactical practice, the player will repeatedly move the hips internally across the opposite leg e.g. kicking, side-stepping or rotation in general or externally e.g. turning. Reduced internal rotation of the hip has been found in several sporting populations and has been either retrospectively or prospectively associated with injury. For example, Vad and colleagues in 2004 noted a relationship between low back pain and hip ROM deficits. Other authors such as Murray et al in 2009 have also noted a relationship between hip rotation range of motion and low back, chronic groin injury and acute adductor strains.