Tempo runs originate from track and field, but they can be utilised in rugby conditioning. In general, there are tempo runs for more middle to long distance runners and there are tempo runs for sprinters which were popularised by the famous sprint coach Charlie Francis. Tempo runs (also known as threshold runs) for middle to longer distance runners involves running at or just below the lactate threshold for a period. The aim is to better prepare the athlete to tolerate higher levels of lactate and to challenge the bodies lactate buffering process so that it adapts and becomes more effective and efficient. This type of training will allow runners to run at a faster pace for longer without going past the lactate threshold and experiencing a more rapid onset of fatigue. While a player could theoretically see improvements in markers of their physical fitness from performing this type of tempo training it is generally not recommended. It is not overly specific to the performance demands of rugby, it is tough training and it focuses more on improving the glycolytic energy system which as mentioned previously may not be the most valuable energy system to develop for rugby performance.

Figure 14. Tempo Runs may be completed between 65% and 75% of the player's maximal sprint effort. This corresponds to an effort of between 6 and 8 of a Rate of Perceived Exertion (RPE) scale of 10. 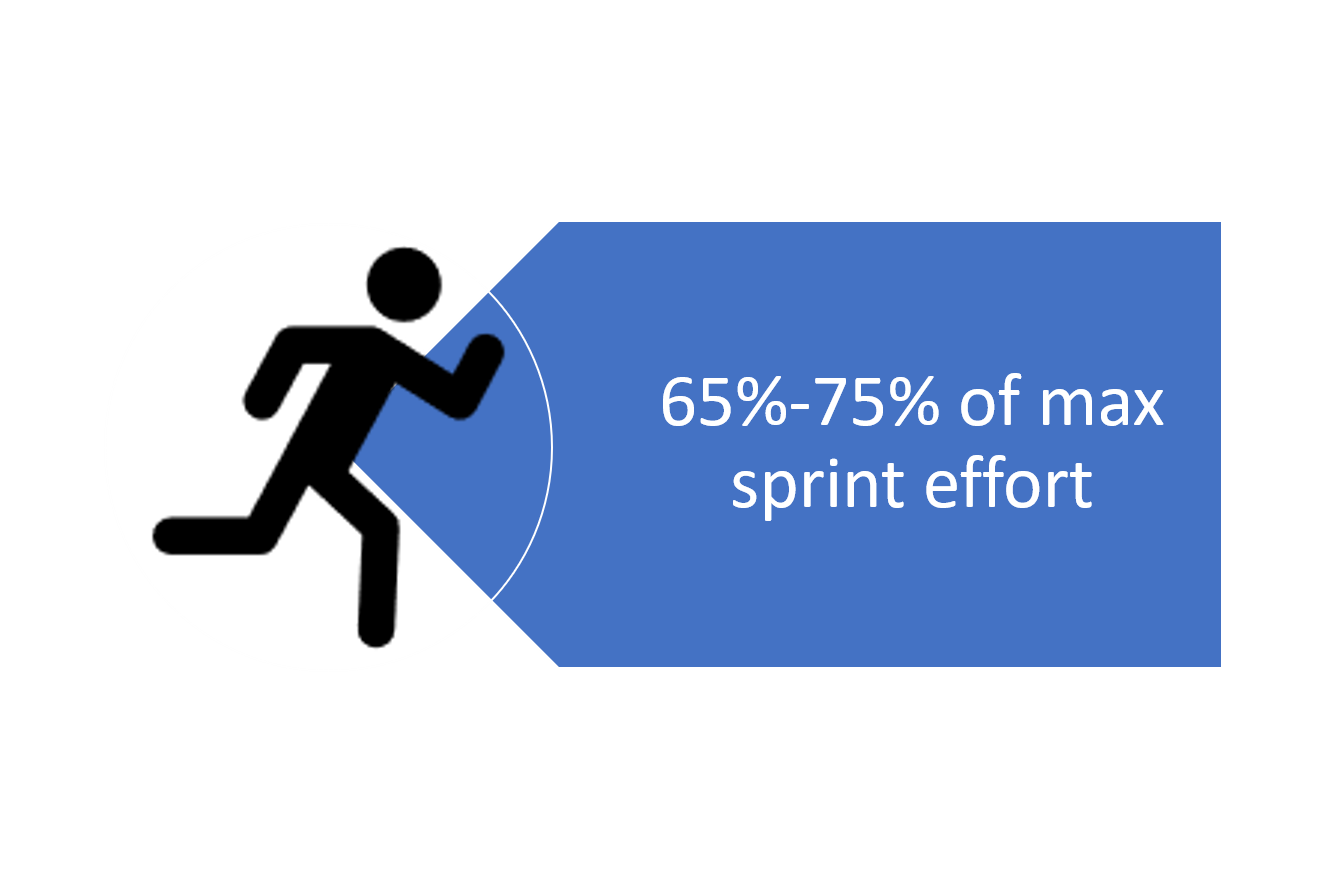 Tempo runs for sprinters are used as a form of aerobic development and as a form of active recovery from the high intensity days of sprint training. They involve running at between 65-75% of maximum sprint speed for intervals over a set distance. While sprinters would not want to do too much of their training a low speed, aerobic tempo runs at the right volume can have some beneficial adaptations. They can help improve the capillary density in the body helping with blood flow and recovery. This can also potentially help keep the muscle temperature elevated between high intensity repetitions during sprint training. Charlie Francis utilised a high low training approach with his sprinters. The high intensity training like sprints and max strength training (which are taxing on the Central Nervous System [CNS]), was performed on the same day and this was interspersed with days of lower intensity training (not very taxing on the central nervous system) like the tempo runs.

Tempo runs for sprinters are more suitable for rugby players given the game demands, training structure, and the energy systems taxed and may be a valuable way to integrate aerobic conditioning in the training plan. The high low model of training used by Francis for his tempo runs fits well within the rugby structure. High intensity, CNS taxing activities like sprint training, maximal strength and power training or game training, which is contact or collision heavy for example, may be able to be grouped together in a day. Then low intensity activity like tempo runs could be completed in between these high intensity days to allow CNS recovery while still achieving some conditioning work performed. This is illustrated in Table 2 below.

As discussed in the repeated sprint ability section, the energy systems that coaches may get the most benefit from training for rugby players, are the aerobic and alactic systems. This model of training for sprinters basically mirrors those demands. The aerobic system is developed with the aerobic tempo runs and the speed and power work are trained on separate high intensity days. The player is improving their aerobic fitness and their speed which will allow them to be faster or more powerful in their high intensity efforts and recover quicker between high intensity bouts. Tempo runs also allow players to work on their body positioning and general movement mechanics of sprinting in a submaximal intensity environment. This may help in improving sprint technique which will translate to a faster player.

The intensity is kept between 65-75% of maximal sprint speed. To calculate sprint speed, a simple speed test of 60m is advised. Once the coach has time and distance, they can work out the speed of the player and then calculate 65-75% of that speed. For example, if a player takes 9 seconds to run 60m then their speed is 6.66 m/s. 65% of 6.66 m/s is 4.33m/s. The coach now knows that to set intervals for tempo training, 4.33 m/s will allow them to calculate the distance needed to be covered in a set period to work at 65% of maximal speed. The total session volume for tempo runs may be between 1000-1500m but volume should be built up gradually for those with lower training ages. Distances of 50-200m can be used for the intervals. For rest periods between runs, the coach should double the time of the run. This allows the body to recover and to clear lactate. With tempo runs the aim is to maintain movement quality to gain some carryover to speed training and as they are seen as recovery runs as well as aerobic fitness builders, the player should not experience high levels of fatigue during their tempo runs.