While injuries occur within all sports, one of the main goals of any conditioning programme is to reduce the risk of injury by training and conditioning the player appropriately to meet the demands of the game.

Figure 1. It is important to understand the factors associated with the occurrence of injury in training/practice and match-play. 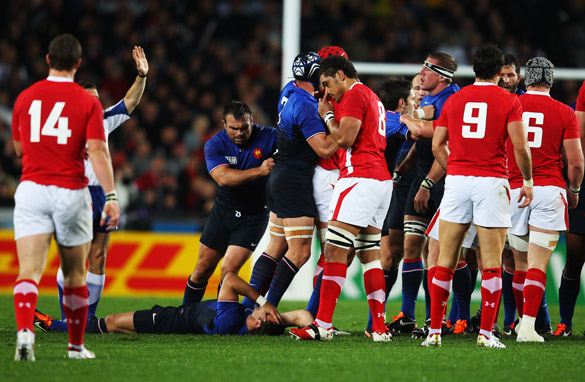 It has been reported by Carling and colleagues in 2015, that within some sports including Rugby Union, success within the game is inversely related to injury incidence. In other words, a team that suffers fewer injuries throughout the season will generally do better than a team which sustained more injuries. To help coaches effectively condition players across all levels of the game it is important to understand the incidence of injury in the game and the factors associated with the occurrence of injury. Understanding these key areas will guide coaches aiming to reduce injury risk as they plan, conduct, and manage a strength and conditioning programme.

Over a decade ago the International Rugby Board established a Rugby Injury Consensus Group (RICG) to reach an agreement on the appropriate definitions and methodologies to standardise the recording of injuries and reporting of studies in rugby union. As a result, Fuller and colleagues in 2007 offered a detailed definition of injury. The following definition of “injury” was accepted by the RICG:

‘’Any physical complaint, which was caused by a transfer of energy that exceeded the body's ability to maintain its structural and/or functional integrity, that was sustained by a player during a rugby match or rugby training, irrespective of the need for medical attention or time‐loss from rugby activities. An injury that results in a player receiving medical attention is referred to as a ‘medical‐attention' injury and an injury that results in a player being unable to take a full part in future rugby training or match play as a ‘time‐loss' injury.”

A term commonly used when referring to the frequency of injuries within a sporting context is the incidence of injury. Injury incidence in team sports is typically described as the number of injuries per 1000 hours of participation. Further, participation can be categorised as either training and practice, or as game or match-play only injury incidence or as the combination of both training/practice and match-play. For example, the Irish Rugby Injury Surveillance Report (Leahy at al 2019) reported the incidence of injuries occurring in senior school match play within Ireland during 2018 as follows:

This method of describing the injury incidence is commonly used within Rugby Union and indeed across most team sports to make comparisons across different levels of the game and from season to season (Vanderlai et al 2014, Hislop et al 2017, Falkenmere et al 2019, Leahy et al 2019).

In keeping with the 2007 definition many studies now use a ‘time-loss’ from full training and practice and play as the definition of injury severity (Roberts et al 2013). For example, injury severity in the Roberts et al (2013) study was defined by the number of weeks missed. This is in keeping with the definition proposed by Fuller and colleagues in 2007 for defining injury severity. Specifically, Fuller and colleague’s definition was clarified as ‘The number of days that have elapsed from the date of injury to the date of the player's return to full participation in team training and availability for match selection’ (see Table 1. below).

The burden of an injury assesses the frequency of an injury in relation to the severity of the injury (measured as the number of days absence).