When conditioning players, the coach aims to train and cause adaptation in the energy systems of the body. Conditioning training should aim to enable the players to perform repeated high intensity efforts of a locomotion or collision-based nature, with as little performance decay as possible due to fatigue. The player also needs to be able to cover the typical match distances for their position and this is often performed at a lower intensity of effort. This requires both development of the aerobic and anaerobic energy systems.

Figure 8. Listing the demands of the game will allow for a greater insight into the conditioning process. 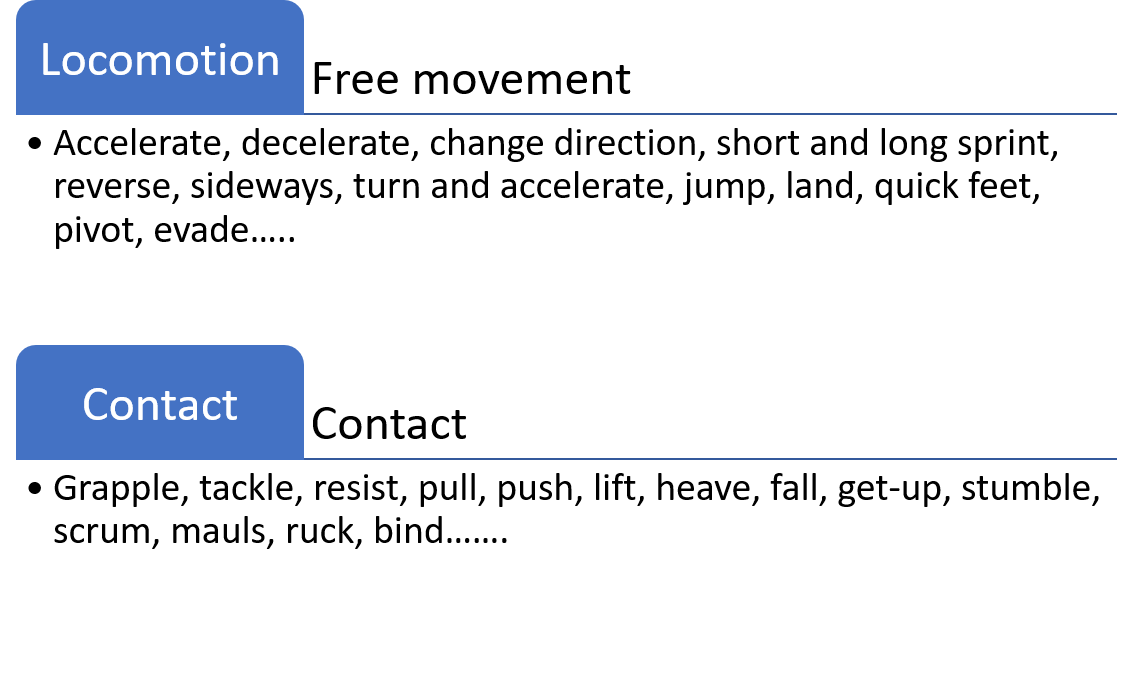 As none of the three energy systems ever switch off, their contribution to energy production is determined by the intensity and duration of effort. In rugby the aerobic system will dominate in the lower intensity efforts which make up a large proportion of game play. Suarez-Arrones and colleagues in 2012 showed that in elite male players, the majority of the distance covered in the game was at a speed between 0-12 km/hr. and that the average speed for players across the game was 4.3km/hr. and 4.77 km/hr. for forwards and backs respectively. This shows a big aerobic component to the locomotion demands. The high intensity efforts lead the anaerobic energy systems to dominate the energy supply. Austin and colleagues in 2011 looked at the high intensity demands of rugby. A repeated high-intensity exercise bout was considered to involve three or more sprints, and/or tackles and/or scrum/ruck/maul activities within 21 seconds during the same passage of play. The range of repeated high-intensity exercise bouts for each group in a match was:

Based on the demands of the game, the coach aims to improve how hard their players can work, increase their ability to maintain high levels of intensity for longer and improve their ability to recover between these high intensity efforts whilst still moving around the pitch at lower intensities. The coach will need to target improvements in aerobic endurance or capacity and anaerobic power and capacity. This should inform the basis of the conditioning training.