While the technical and tactical skillset required do not differ, it is important to consider the physiological differences that exist between the sexes when designing training programmes.

In general, females have a higher body fat percentage than males and males are bigger and possess more muscle mass. Men also carry more muscle mass (approximately 3%) in their upper body compared to females. These body size and composition differences are primarily due to the differences in hormone secretion during puberty and through into adulthood. Before puberty, there are no significant differences in body size or composition between males and females. As a result of these size and body composition differences, men are generally significantly stronger in absolute terms. When strength is expressed relative to the amount of fat free mass a male or female has however, the strength difference is negligible. This shows there are no innate differences between the muscle of males and females, men just have more of it.

Figure 4. Following resistance training there is no difference in the magnitude of increase in strength between male and female players. 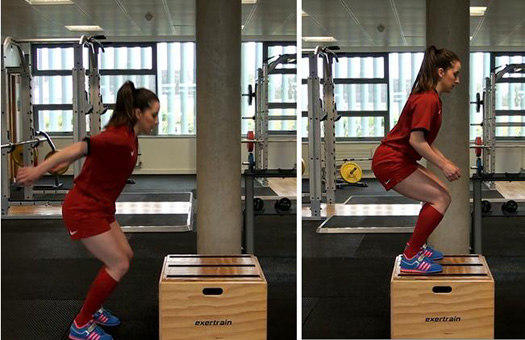 Many of the physiological differences between males and females are due to difference in size. Females generally have smaller hearts and lower blood volume and thus a higher heart rate compared to males at a given submaximal workload. Maximal oxygen consumption or VO2 Max, is generally lower in females compared to males possibly due to females carrying more fat mass, and lower oxygen transport capability because of lower blood volume and a lower cardiac output.

Though the size advantage of males provides some benefits in aerobic capacity, females can display better resistance to fatigue than males. There are several possible reasons for this including dominant muscle fibre type and the main fuel used during exercise. In general, women are suited to more endurance type exercise whereas males have a greater capacity for short explosive bursts.