Speed is a highly sought attribute in almost all sports. Athletes with superior speed are considered to have an advantage over their opponents. In rugby however, speed alone (linear speed) is not enough, as the sport is multifaceted in nature and requires a combination of fitness and cognitive components. Players must have the ability to perform their game related tasks, in addition to numerous other capabilities such as changing direction. This suggests that speed within the seven and fifteen a-side-game is far more than the ability to express speed in a linear fashion. According to Jeffreys and colleagues in 2018, the development of superior speed and agility will give the player a greater range of options and leave them at an even greater advantage in mastering the multifaceted nature of Gamespeed.

Figure 1. A range of speed skills and capacities is essential in rugby. 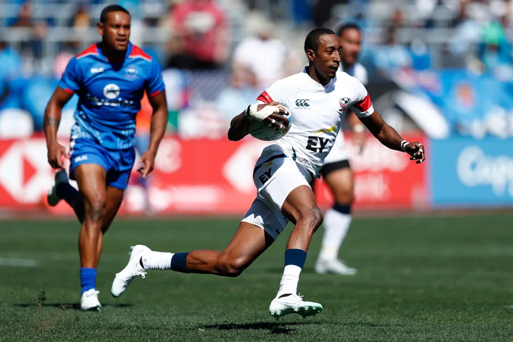 Speed in sport is frequently trained in a pre-programmed manner and this may not, for many sports, such as Rugby, be appropriate. Jeffreys (2018), developed the concept of “Gamespeed” to distinguish between generic agility training and training to improve sport specific performance. Jeffreys has defined Gamespeed as: ‘context specific, where an athlete maximises their sports performance via the application of sport‐specific movement of optimal velocity, precision, efficiency and control in anticipation of, and in response to, the key perceptual stimuli, and skill requirements of the game’.

The concept of Gamespeed is very similar to the definition of agility, where a response is initiated following a stimulus, however, Gamespeed encompasses more than perceptual-cognitive factors and change of direction, it also encompasses scenarios specific to the game and the skill requirements of the game. Thus, Gamespeed is multifactorial. We must train it as such and challenge the different factors which include sports specific decision-making factors, in addition to physical qualities. Note that the concept of Gamespeed does not dismiss the basic skills or generic pre-planned drills. It employs a continuum of building basic skills and movement patterns before progressing to game-specific training as shown in Figure 1 below. 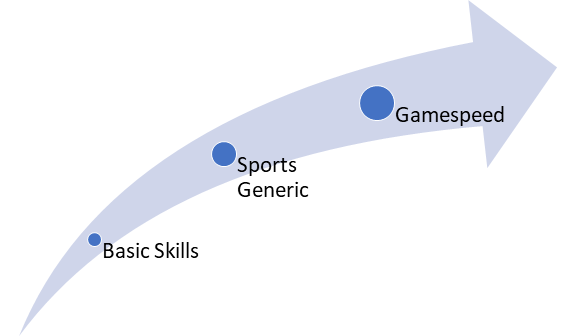 Coaches should aim to develop players with the physical and skill capacities to carry out effective movements, and with the cognitive capacities to make effective decisions in both low and high-pressure settings. Put simply, coaches should train players in a manner that reflects the way the movements are deployed in a game (Jeffreys et al 2018). It is not uncommon for players with superior performance on a closed skill agility test to be unable to transfer that performance to the field of play (Bate & Jeffreys, 2015). This is because there is much more required than the ability to change direction. All actions or movements patterns must allow players to optimally express the sport specific skill. According to Jeffreys and colleagues (2018), once basic skills and movement patterns have been mastered, agility should be trained in sports specific and task specific way. Put simply, Gamespeed is a concept that requires speed and agility to be addressed in a manner in which it is applied to the specific context of the game (Bate & Jeffreys, 2015).

Rugby requires complex movement patterns to be initiated at random based on the events unfolding during a game. Figure 2 below categorises target movement functions and movement patterns in many sports. This model can also assist in identifying which movement patterns form the basis for specific tasks during play. For example, a defending player may use a range of movements such as accelerating, backtracking, or side-shuffling, when reading and waiting to react to the unfolding game. When the opportunity arises, they accelerate and close the distance to make a tackle. Based on this model, movements can be classified as: 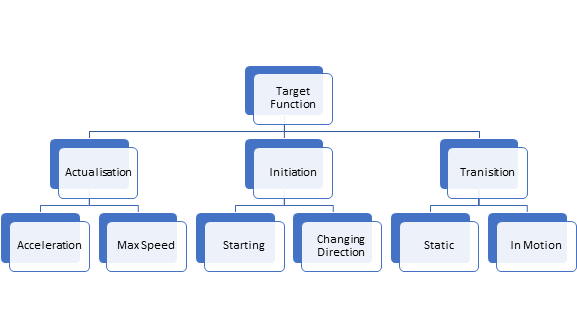