Injuries can be classified as an acute (traumatic) injury or a chronic (gradual onset) injury. Acute injuries are generally caused by a large force whereas chronic injuries are an accumulation of repeated small forces over time. Some examples of acute injuries we may see in rugby would be a concussion, a broken bone, a muscle strain, or tear or even a dislocation in the joint. On the other hand, chronic injuries would be the likes of a stress fracture, Osgood-Schlatter Disease, or tendinitis.

Of all injuries common to collision sports, concussions have received the most attention due to the potentially negative cognitive effects both in the short and long-term. Recently, Brown and colleagues in 2019 sought to describe the incidence and events associated with concussion in the amateur population. Overall, they reported 89 time-loss injuries, which equated to an injury rate of 30.6 per 1,000 match hours, or about one injury per match. The authors found that the most common injury diagnosis was a concussion which counted for 27 of the 89 reported injuries at a rate of 9.3 per 1,000 match hours. The three most common mechanisms of concussion in this study were performing a tackle (33%), accidental collision (30%) and being tackled (11%). Further, a recent report from Leahy and colleagues in 2019 within the amateur male and female game noted that most injuries occurred primarily in the head (concussion).

Within amateur male players the greatest number of injuries occurred in the lower limb (46.9%), followed by the upper limb (32%) and then the head/face/cervical spine (20.8%) (Falkenmere et al 2019). This trend is also reported by Roberts et al (2013) for male adult players at community level and for male schoolboy players (Leahy et al 2019). Similarly, Leahy and colleagues in 2019 reported that the hamstring strain and ankle sprains were the most common soft tissue injuries in amateur male players. Also, the same authors reported that ankle and knee sprain was the most common soft tissue injuries in amateur female players.

Figure 3. Hamstring strain injury is one of the most common soft tissue injuries in the game.

It has been frequently reported that the most common mechanism of injury in both training and match-play is that of the tackle (Leahy et al 2019, Roberts et al 2013, Schneiders et al 2009). Leahy and colleagues in 2019 noted that 48% of tackle related injuries were sustained by the ball carrier and 52% of tackle related injuries were sustained by the tackler. This is typical of that reported in other studies (Schneiders et al 2009) even though some studies have reported that the ball carrier may be more exposed to injury (Roberts et al 2013) while other studies report little different in exposure between the ball carrier and tackler (Bird et al 1998).

Figure 4. Shoulder injuries are common within the game. 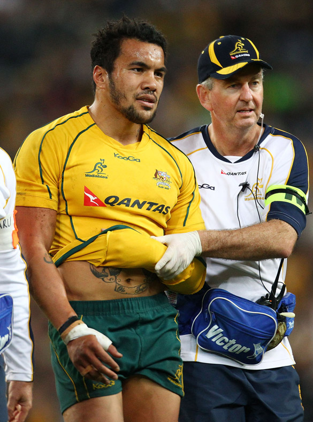 An interesting factor to consider is the injury history of an athlete. Previous injuries are without doubt a non-modifiable factor as one cannot change the past. This information is still very important to know as you aim to reduce injury risk. In particular, the mechanism of a previous injury and the time of play where most injuries are likely to occur. According to Small and colleagues in 2009, the latter point may mean that the player changes their movement technique as physical fatigue occurs later in the game. This information can be used to add to each player’s individualised injury risk reduction strategy especially during return to play following injury where an emphasis on specific warm-up practices, better conditioning as well as gradually exposing a previously injured player to a progressive increase in match-play time.

For example, if a player has a shoulder joint injury caused by awkwardly landing on an outstretched arm, stabilising exercises may be appropriate to include in their warm-ups. Similarly, if a player has a history of a hamstring strain sustained while sprinting then it may be beneficial to add hamstring strengthening exercises and drills to improve a players change of direction skills as well as sprint mechanics training (Small et al 2009).